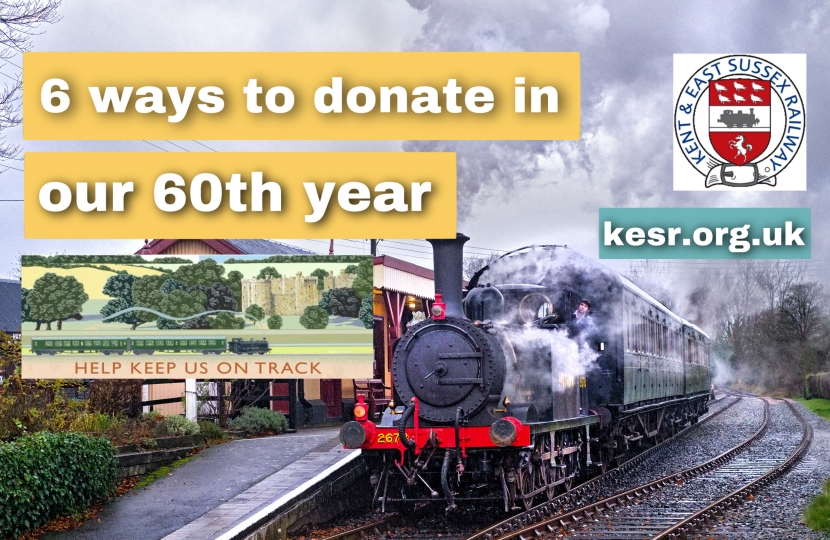 It is I hope a sign of the times that this week I am writing about something which indicates better things to come. This is the 60th anniversary appeal of the Kent & East Sussex Railway, which is looking forward to welcoming back passengers to its station in Tenterden this summer.

The railway had been a commercial line which closed, and was re-opened thanks partly to the efforts of one of my predecessors, the great Bill Deedes, who took on the Department of Transport to allow the line to operate between Tenterden and Bodiam.

Over recent years the railway has become a significant tourist attraction not just for Tenterden but for the whole area. Nearly 90,000 visitors travel on the trains, bringing more than £5million pounds to the local economy. There are also some 400 volunteers who enjoy helping the K&ESR operate.

Of course as with so many businesses and charities (the railway has charitable status) 2020 was a write-off, and the first few months of this year have been equally frustrating. The Santa Special trains fell victim to the restrictions, and the luxury Wealden Pullman dining service has had to be suspended.

The railway has benefitted with a grant from the Government’s Culture Recovery Fund, which secured its operating costs until this month, but even with the hope that we now have of a gradual return to normality, more needs to be done.

Therefore the railway is setting up a Sustainability Fund appeal, which aims to raise £100,000 both to tide it over and to ensure that it can restart operations with confidence once the restrictions are eased.

I spent a happy morning helping film a video to launch the appeal, and was reminded of the great history that surrounds the station and the trains, and the huge enthusiasm of those who keep it running. This appeal is well worth supporting: https://kesr.org.uk

I know how anxious people are about safety in Ashford Town Centre, so it was reassuring to be shown around the various new measures put in place as part of the Ashford Safer Streets initiative.