Our Man - Celebrating Apprenticeships in Ashford 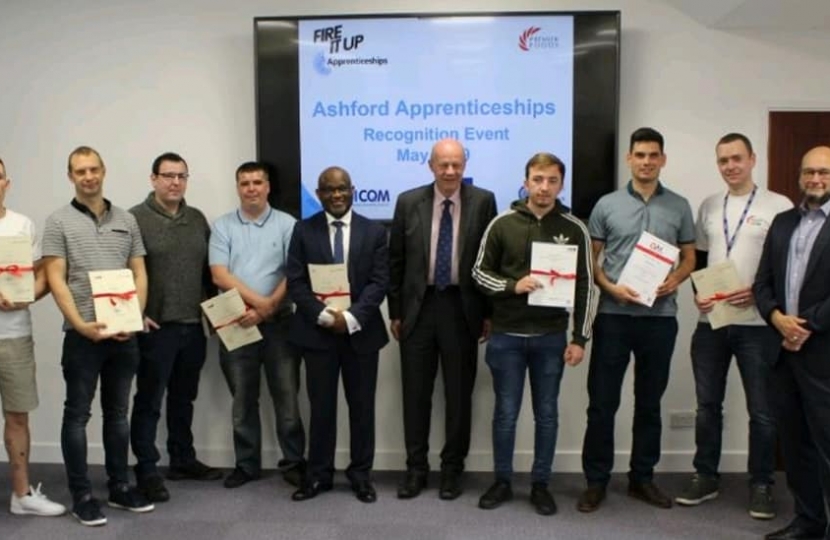 In a world where technology changes everything very quickly, the best way to make sure you can keep up as an individual is to learn new skills and gain new qualifications.

This is why I really enjoyed handing out certificates at Premier Foods to a group of apprentices who have completed their courses over the past year. I had met some of them at the start of the course early last year, and some of them were nervous about whether they could complete it. If it is years since you last took an exam at school, you are entitled to be anxious.

This made it all the better to see the sense of pride in the achievement of those who had gone through the apprenticeship route, and equally the pleasure of the management team at Premier Foods, who recognise that growing the skills of their existing workforce is an essential route to staying competitive in a tough business world.

For many people this kind of qualification is as useful as a degree, and I strongly believe that we should celebrate them equally. An apprenticeship allows you to earn and learn at the same time. This makes them especially useful for those who realise the need for extra qualifications later in life; they are not just for younger workers.

Premier’s Ashford plant is of course part of a big organisation, and so has the capacity to encourage its workers into apprenticeships. I know it is often more difficult for small businesses to do this, but when they employ apprentices they too see the benefits. There have been four million apprenticeship starts since 2010, and I hope we will see many more in the coming years.

We all want to see a skilled, and therefore high-paid, working population in Ashford. Learning new skills is the best way to make that happen.

Parliamentary debate about High Speed One