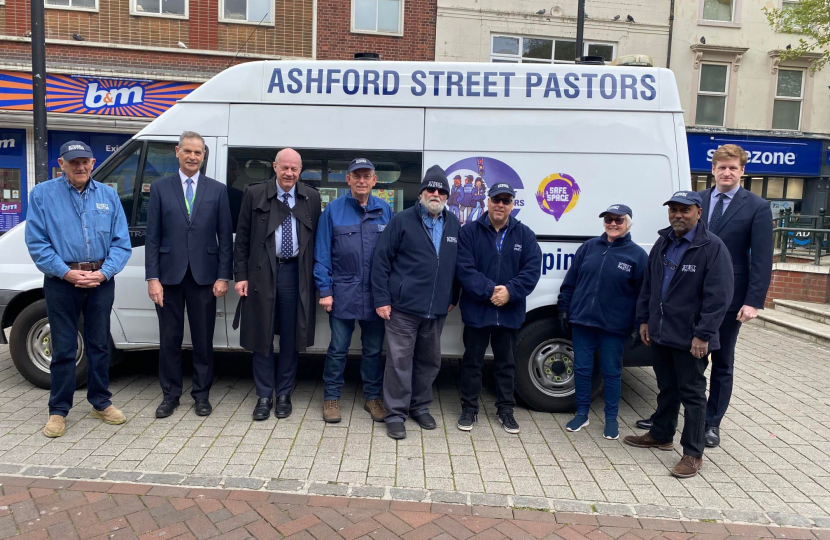 I know how anxious people are about safety in Ashford Town Centre, so it was reassuring to be shown around the various new measures put in place as part of the Ashford Safer Streets initiative. On Friday Kent’s Police and Crime Commissioner Matthew Scott joined me, Ashford Borough Council and the police to investigate what is new.

The various projects are funded by the Home Office to the tune of more than half a million pounds, after a bidding process through the PCC. One of the keys to success is the partnership between the police and the council, so that they can bring their different powers to bear on those who want to cause trouble.

For example, the new CCTV cameras we saw at the Edinburgh Road car park have already led to information about a variety of problems from minor vandalism to drug dealing and will obviously help to make the car park less threatening.

The range of safe spaces now established around the town centre also gives people who feel threatened a place of refuge to avoid trouble. They will all be displaying the “Safe Space” logo.

The biggest single piece of new kit is a van for the excellent Street Pastors, who offer help to those who need it late on a Friday night (and some Saturdays). This will itself be a mobile safe space. Anything that helps the volunteer Street Pastors has my complete support.

Of course it’s 2022 so there has to be an App. The Ashford Streetwise App which is now available allows visitors to know where the best lit routes are, as well as those covered by CCTV, and where there are likely to be large numbers of other people. This last fact is often the most important in terms of personal safety.

Safer Streets is a good initiative. I hope it contributes to the recovery of the town’s economy and expect it to do just that.

It is a small consolation after the problems on our roads over recent weeks, but at least the restrictions on the M20 were lifted in time to give everyone as normal an Easter weekend as possible, with visits to friends and relatives not being interrupted too badly.