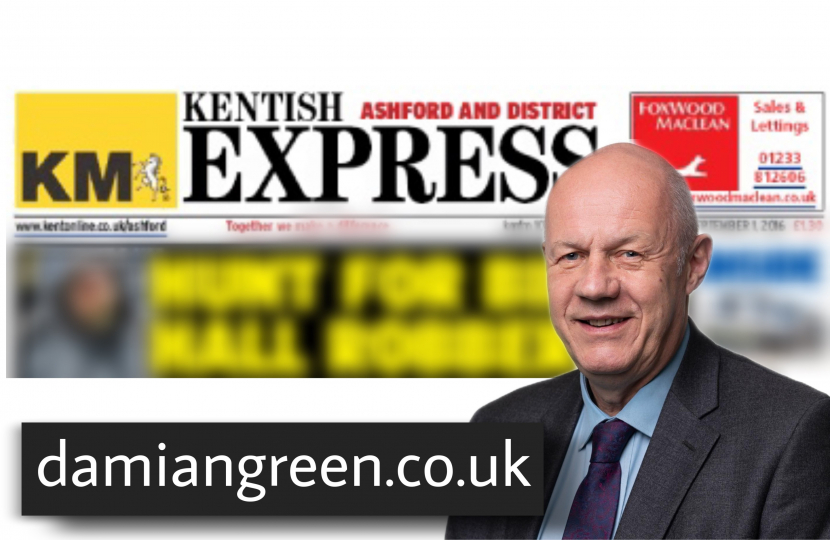 The world has seemed particularly out of its normal orbit in the last few days. Just as Parliament recessed for the summer, normally a time for the pace of life to ease up, we faced another outbreak of traffic problems, a serious water shortage, and the battle to be the next Prime Minister.

I could fill most of this week’s paper writing about any of these, but I will stick with water issues for the time being. People in Challock, Molash and parts of Charing suffered a miserable week relying on bottled water deliveries and intermittent supply into their homes when the pumps could be switched on.

The immediate problem, caused of course by the heatwave which culminated in the record high temperatures for a couple of days, was the drop in supply to a small reservoir near Charing which serves the area. If the reservoir is emptied entirely it takes much longer to fill it, and the effect is to cut off supply from many more people.

That is the short-term issue, which South East Water has to solve. The long-term solution is to build greater resilience into Kent’s water supplies. For many years now there have been plans drawn up to build a new reservoir at Broad Oak near Canterbury.

The water industry works on a five-year funding cycle, which means that the regulator OFWAT allows each company to set prices at a level which allows the necessary capital investment. So far, at each five-year review, OFWAT has not thought the Broad Oak project is necessary.

I, and I suspect everyone in Challock and Molash, would question that judgement. I think OFWAT should recognise that the long squeeze on water supplies, combined with a rising population in many areas of Kent, means that a new reservoir is now an urgently needed project.

I am glad that Boris Johnson eventually agreed to resign as Prime Minister, following the clear wishes of Ministers and many backbenchers.